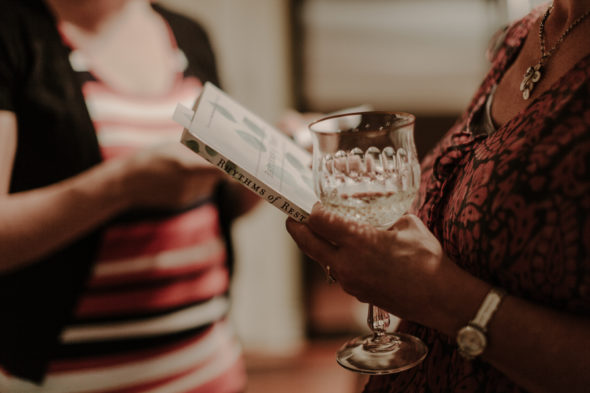 I don’t do guilt.

It’s the mantra I adopted from my mother-in-law, Geri, more than twenty-five years ago, when I became one of her children, a phrase as familiar as her welcoming blue eyes and the accepting smile we witness as she walks through the gate at the airport when she visits with us over the holidays.

Last week, Geri surprised me with a visit in Nashville, Tennessee while on my book tour. The details leading up to her arrival seem miraculous so lean in for a minute while I recount them.

The day before I embarked upon a book tour in five states, my H discovered my complete itinerary was deleted with the airline. There was no evidence that travelling was in my future and the offices were closed in London. Imagine me, interrupted by this news while in the midst of packing a suitcase intended for three weeks away.

This is where Geri comes in.

She lives in Phoenix, Arizona, and this time, the eight hour difference between London works in our favor. She calls the airline on my behalf, attempting to obtain clarity about the missing ticket. After three hours on the phone with an agent, Geri voxs to say my original itinerary is finally resurrected. Obviously, I celebrated an answer to pleading prayers on Facebook with this simple status update.

Thank God for my MIL Geri Miller who got my cancelled flights to the US back on. If anyone wants to fly her to one of my speaking engagements so I can actually see her while I’m in the US, let me know!

Unbeknownst to me, an angel named Heather who saw that update contacted Geri within minutes. I’ve never met her in person but it turns out, a generous heart has no barriers. She gave away accrued miles in order for Geri to fly to Nashville and hear me speak.

And here is me freaking out at unusually high decibels when I see Geri walk through the door of the house I am staying in with my friend Dea.

Heather is also the artist of an adult coloring book, Grace of Many Colors. It would be an amazing act of kindness if we could bless Heather in the same spirit of generosity. Purchase her art on Amazon!

The first chapter of Rhythms of Rest begins with Geri’s mantra I don’t do guilt, one of the many things she’s taught me over the years through her life. And when it comes to Sabbath, guilt is one of the main roadblocks keeping rest elusive.

Join me over at Velvet Ashes today where I’m sharing about how we can transform the guilt we experience in rest into times of restorative grace.

And you can listen to this podcast at Feathers: Shelly Miller: A Move Overseas and Rhythms of Rest hosted by Amy J. Bennett and recorded the day before I flew back to London this week.